self-awareness is at the heart of process work

About a year ago I began researching a course in process oriented psychology, or process work as it’s called in short. I had explored process work a bit, my first taste was the 2008 World Work conference in London. While the course was amazing, much of it also was beyond me, as I had no foundation onto which to hang the new concepts.

Since then I have come across process work in ways you might expect – more reading, application of the concepts (as best I could), further related training. Finally last year in February, after a do-it-yourself 2-day workshop about applying process work to the field of social action training, I knew it was time to return to the source of process work and dig deeper.

After surveying the choices and talking to the staff at the Research Society for Process Oriented Psychology, I

the course ticked all the boxes

ended up choosing the course – Facilitation for Leaders. It ticked the box for learning more about process work from leaders in the field, and another deciding factor was the objective of the course – supporting participants to worked independently on social change projects.

In September 2014, I blogged about the first weekend module of the course. I didn’t yet know what my project was, but if nothing else, I thought the course would help me to figure that out.

By December, I had decided my project and drafted a plan. My project was/is short social change stories. The idea is short text (about 500 words) to convey in simple terms complex ideas and theories about how change happens, illustrated with a few (maximum 15) images. These stories are intended for an adult audience, and are light, fun, easy to read, yet thought-provoking.

the plan is to change the plan!

As sometimes happens to the best of intentions, my plan didn’t quite go the way I expected. I have written some short social change stories, though not as many as I hoped.

Earlier this month we had our last weekend module of the course, and in preparing for the weekend, I assessed what progress I had made.

the reckoning — how did I do?

In a few words: not much. I have a computer full of files with ‘starts’ to stories, tens of new images, and a few finished stories on-line. None of these stories have made it to the printers and into book format however, and the up-date of a 2012 book about the Zapatistas is still un-up-dated.

The course and goings-on in my life (and choices I made about that) did not focus my efforts in ways that I had hoped.

So I did what I suggest to grassroots groups who are evaluating their strategy plan and deciding the way forward at a milestone, which is – in addition to assessing forward progress towards the goal, to also look around and behind and ask, well if what I planned didn’t happen, what did?

the blog reveals all

Since this blog is to be a platform for these stories (among other things) I looked at the blog. If I hadn’t been writing

if not that, then what?

and publishing short stories about social change last year, what was I writing about? When I started the blog last year, I set myself the goal of one post per week, and reviewing the contents I see I managed to post (on average) 41 out of 52 weeks. A bit off the mark, but I found it enormously satisfying given the past 12 month’s manic pace of life and work: Western Sahara, Mexico, South Sudan, Spain (two times), the US of A, and up and down and all around Great Britain. It was a travel-full year!

I then looked at what type of content, and I found that I had written 18 stories categorised as ‘personal journeys‘, which surprised me because I didn’t consciously intend this space for telling my own story! Another surprise came when I realised that I had begun to use the blog for Spanish to English language practice (translating Eduardo Galeano). Also my little dog Oscar wiggled his way into the blog too, which shouldn’t surprise me too much (because that’s the way he is) but again, it was unexpected.

The fewest posts I had made were the ‘artsy’ ones which is what I had thought I wanted this space for. But it’s turning out different, why is that? And how (and whether) to re-focus this blog short stories project? Or just leave it and see what happens? 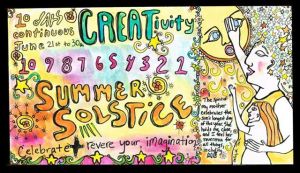 I belong to an on-line creativity community and fortunately it’s nearly time for the June Solstice Challenge 2015, 10-days-of-continuous CREATIVITY – making, sharing and reflecting on the creative process. I say ‘fortunately’ because these group creativity challenges in the past have helped me get started, identify goals and focus my efforts to get stuff done. This technique doesn’t always work for me (i.e., end of 2104 creativity challenge), but it has worked more often than not.

think about it, mix it up, and see what happens

So that’s my work now and the countdown has begun, only two days now until the Summer Solstice. Over the next few days I will re-visit what I think this blog is all about and what sort of ‘stories’ I aim to publish over the next 12 months. I will make a plan, set new goals and check-in on it all later.