Oscar – on the move

of spunk and jump in me, and I get around. Literally. Ever since I came home on the bus from the ‘puppy market’ in Perisur (Mexico City) I have been on the move.

By paw, car, van, bus, train, plane, tube (metro or subway depending on the local lingo) ferry boat, canal boat and bicycle. I am a dog who knows how to get around.

as a Mexican dog, I prefer sunshine over grey and gloomy skies

I’ve lived in London nearly 10 years, and for the last 5 months on board a canal boat on the River Lea in East London. The boat has a continuous cruising license, which means every two weeks we up-mooring pins and move to a new neighbourhood. So lately I’ve really been on the move a lot.

where next? Spain, they say!

Sigh-woof. While canal boat life has had some positive points, like I’ve been free to roam without a lead (or leash as the ‘gringos’ say) nearly the whole time, I am ready to settle somewhere more permanent for a few years.

Valencia, Spain. I hear my humans looking for that more permanent place now, and so far (given that Valencia’s a big Spanish city, but smaller than London town) it most likely will be a flat in a tall building, maybe old, maybe new. It’s not yet known, but my home will definitely will be nearer the beach than now, and I know I’ll like that.

Sigh-woof. I don’t much mind, I’m happy wherever my supper dish and humans are, but I have enjoyed having my own garden over the years (for clearer territorial boundaries and more sensible barking).

living here and there

In Mexico City, I lived on the fourth floor of a block of flats, #73 Denmark

ding-a-ling, let me out, please!

Street. In retrospect this ‘international address’ was a harbinger of things to come! There I had a big roof-top terrace to romp and play, and a little bell by the door to ring whenever I wanted to go out.

A year and a wee bit after living on Denmark Street, my humans decided to up sticks and move to London, 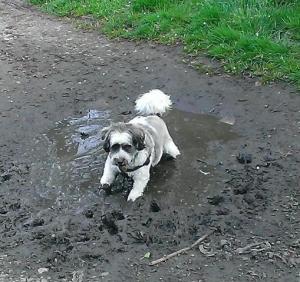 one thing I like about wherever I live, there’s always mud!

and I spent one year in California doing my immigration paper work. As you may know, in this crazy upside down world goods and capital move freely while humans and companion pets have to jump through hoops to prove we’re worthy enough to travel.

Sunny California was a blast! The weather and food as good as Mexico and in some aspects even better

did someone say ‘chicken’?

as my gran-human believed little dogs should eat lots of chicken (her recipe, simply boiled and ripped to yummy bite-sized bits). Her garden was good too, with plenty of cats in the ‘hood for better and sensible barking.

Sigh-woof, even so I was a wee bit sad separated from my ‘numero uno’ ones, and they were too. Finally after a year The System chewed up and spit out my EU pets passport and I was ready to go.

tiny garden) with a couple of big parks nearby where I made new friends.

After some years there, we moved to a BIG HOUSE with a BIG GARDEN and a bunny rabbit for a next door neighbour, foxes walked the wall at the end of the garden and oh the cats! Such a lively neighbourhood, I could hardly have asked for more. And my to my delight there was more! We shared the BIG HOUSE with two other humans which meant 4 sets of hands for stroking, petting and playing and even better 4 sets of legs for going walkies!

Sigh-woof, but all good things must come an end and after some years there we moved again. This time into a little house with a little garden and a little garden house. Minus missing the extra humans in my life, this was the best place of all in London. A little garden meant really clear territorial boundaries and really sensible barking, which I did a lot.

Sigh-woof, and then the last 5 months on board the boat. Like I said, 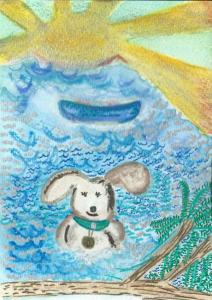 rivers, fountains and the ocean, I like a swim wherever … in the right season

there’s been good points, like the freedom to wander, but I’ve never quite got a handle on where my territory ends and begins. The tow path is too big for a little dog to defend all on his own. And with all the moving around, I’ve sometimes become confused about which side of the boat is the tow path and which is the river-side. I jumped in a few times by accident, but then discovered I liked it and just did it a few more times for fun. Then Autumn and Winter came. I haven’t been in the river since September.

Sigh-woof. I haven’t been to Valencia yet, I’m told I’ll like it, that’s it’s culturally similar to my motherland, Mexico. And best yet, after nearly ten years of grey and gloomy weather, that there’s sunshine there. All this I believe to be true because a few years back I spent a month in (nearby) Barcelona, which I’m not entirely sure why we’re not going there, but I go wherever my humans go, and today they say that’s Valencia, Spain … in 34-days time! 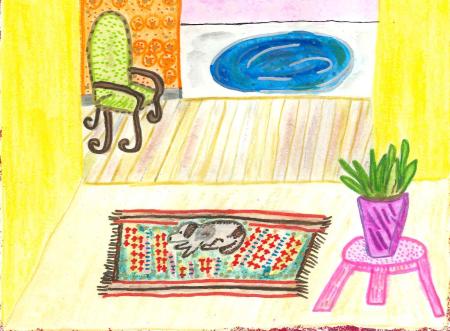 Sigh-woof. That’s all for now as there’s lots to get done before we go.

this is OK, but I really prefer walking, woof! 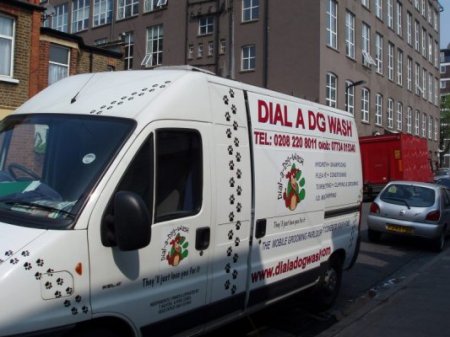 London tube travel, so civilised! No dogs allowed on the Mexico City metro, so they used to dress me up like an infant and carry me on, and this bad hair cut the work of the man in the van