Hallelujah Truth and her pals were just here visiting. The last time we met was in 2012, in London.

Hal has recently added “interplay” to her creative tool box and we did one session together and talked non-stop for a week.

I / We found fascinating stuff, both newly discovered and re-released. Here’s one thing that for me came up again, and in doing so also re-released something old to grow something new.

the macro, the big picture

“Many mighty specks of dust” is an idea that has been re-released. Based on a tangle of story ideas archived in a folder – called “story ideas and orphans” – it is about collective and individual power, dancing with our shadows, and change across time and distance.

interconnected – you, me, and us

As I untangle the threads to the story, and search for images to illustrate it, I am struck by reoccurring images and different perspectives to the images of the past years. I have always sensed there was a connection, but I’m only now starting to see a pattern.

zoom in or out, there’s a lot to see, think about

Sigh. Deep breath. Do you feel it? Do you know it, in your bones? Wow. We are many mighty specks of dust. If only we can know it, feel it, be it. More about all this soon. Meanwhile, what are your thoughts? 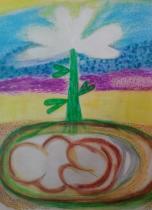