a is for autonomy 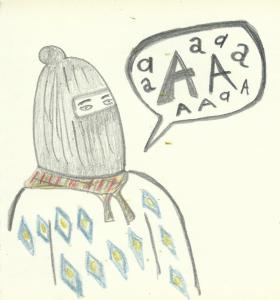 This post is from a page of a little book I’m writing about the Zapatistas. It is a glossary or dictionary of words and concepts, along with a chapter outlining their history and their world view, and another explaining my motivations for writing this book. Watch this space. More about the whole book very soon!

Meanwhile, “a” is for autonomy.

Autonomy, in Zapatista and ordinary parlance, means “self-government”. To have autonomy – as an organization, a region, a country or an individual – is to be independent, to have the right and the ability to make decisions on your own without being controlled by anyone.

“We’re learning to govern ourselves according to our own ways of thinking and living. We’re trying to move forward, to improve and strengthen ourselves – men, women, young people, children, and old people. Twenty years ago there wasn’t a single authority that was of the people. Now we have our autonomous governments. It may be good or bad, but it’s the will of of the people.”

In short, on a political level autonomy is about self-determination, on a personal level it’s about dignity.

In Zapatista territory autonomy means there is no role or presence of the Mexican government, its agencies or political parties. Local authorities rotate to avoid accumulating power and share skills. The community produces or provides for the basic needs of those serving the community. These are practices resurrected from traditions that existed prior to the Spanish conquest and adapted to the Zapatistas’ needs today.

The autonomous municipalities have been a strategic and important weapon to resist the Mexican government and militarization of the zone, and a practical and real experiment in growing an alternative system outside of capitalism. Zapatista resistance means rejecting social programs and financing from the government, and all other aid offered by NGOs that organize along the lines of traditional development aid, with a “patron-client” mentality. Working collectively, communities find solutions to their own problems and Zapatista authorities tell NGOs which projects are needed and they co-create and manage them together.

On December 19, 1994, nearly a year after the armed uprising and this time without even firing a shot, the Zapatistas broke out of a military blockade in the jungle region with the announcement of 32 new autonomous and rebel municipalities in the Northern Zone and the Highlands of Chiapas. One compañero described the insight and creativity to multiply this way as – “If you throw an ear of corn on the ground, the seeds will take root and more corn will grow. This is how we are.” Expanding Zapatista territory also demonstrated their their ability to define their own spaces and carry out the management of their political, economic, social and cultural lives as they see fit.

Zapatista territory represents about one-third of Chiapas, but it is not “guerrilla-controlled” territory in the traditional sense. While some village boundaries are clearly marked and controlled with solely Zapatistas in residence, other Zapatista villages are divided between rebels and residents with allegiance to the government (partidistas). Some villages are large with a couple hundred families, others quite small – 10 or 12 families. To enter Zapatista territory, new visitors need a letter of introduction from a recognized solidarity organization.

Autonomy begins at the local level, with all community members – children, elders and women and men – deciding whether the community should join the autonomous, rebel municipality. If yes, people are then nominated to the village assembly and others to perform community functions, like to the council of elders, cooperatives commission or health care group. Nominees to these cargos – responsibilities – are then also agreed upon by all community members. Representatives from the village assembly and those doing other community services report and coordinate their work areas with other villages at the municipal and Caracol levels.

Despite on-going harassment and repression, autonomy in governance, finance, health care, education, communications, and economics has flourished in Zapatista territory. So proud of what they have accomplished, the Zapatistas invited civil society to the “Little Zapatista School of Freedom” (August and December 2013 and January 2014) and shared their learning and the issues they still struggle with. They produced four textbooks for Escuelita students – Autonomous Government I and II, Participation of Women in Autonomous Government and Autonomous Resistance.

Zapatista autonomy has been a strategic and public relations nightmare for the Mexican government. In theory the Mexican government is sympathetic to the right to autonomy. Article 115 of the Mexican Constitution grants municipal autonomy, and Mexico is signatory to the International Labor Organization Convention 169 recognizing the rights of indigenous peoples to live according to their traditions and customs. Further, the 1996 San Andres Peace Accords, signed by the Mexican government and the EZLN, recognized the indigenous people’s right to autonomy. The government’s failure to follow through and transform the accords into constitutional changes, may have (or not) surprised the Zapatistas, but their response was to further assert their autonomy by declaring they would implement the changes themselves. “We don’t have to ask permission to be free” stated the EZLN.

And so they have, each and every day: protecting their territory from paramilitary attacks and hostilities from the military; tending to their crops, livestock and other economic activities; serving the community in a range of roles; and celebrating life and commemorating landmark events of their history. Evaluating the implementation of the San Andres Accords a few years later, Sub-comandante Marcos said, “We are trying, with our clumsiness and our wise actions, definiteness and vagueness, just trying, but putting life into it, building an alternative. Full of imperfections and always incomplete, but our alternative.”

While autonomy is flourishing in Zapatista territory, disappointingly but perhaps not surprising, no progress has been made about addressing and resolving the conflict or the underlying causes. Quite the contrary, the government and its agents have taken actions to escalate and carry on with the violence.