In my short experience it usually means a few days, up to a week maybe, of cold, damp weather, and it’s a winter-phenomenon. It’s usually a combination of massive downpours with occasional smaller showers and storms and some clear spells.

Today is Wednesday. It has been raining since Sunday.

The first day always seems a bit exotic, cozy even.

The other day we lowered the shutters, lit candles, cooked, ate and did other around the house Sunday-things.

But now, the novelty has worn off.

The meteorological agency predicts tomorrow will be clear. It may be. Bad weather here rarely sticks around long.

And I hope so. I would like to get out of the house, and I know the dog would too.

Lula (the dog) has managed this spell of cabin fever well enough. Her routine has greatly varied but we have managed to do one decent hour-long walk in the park a day. And of course several short jaunts around the block so she could sniff the air and do her toilet business.

Anyhow, to amuse myself and as a way of finding some joy in the weather, I drew this comic strip of Lula and the rain.

lula and the rain

Me:  I don’tknow. Shall we try going out again?

Woof love forever and thank you for reading. 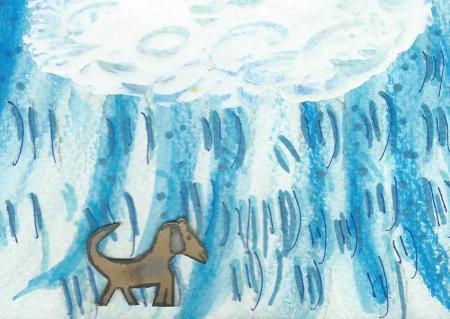