Meet Oscar. He is going to be 11 years old in March. He was born in Mexico City. Ian and I had been talking about getting a dog, and one day in May 2004, we did.

We had looked at notices in the newspaper, seen signs posted at the grocery store or market. We had heard about a ‘puppy’ market in ‘Perisur’, (a neighbourhood) in Coyoacan, Mexico City.

So one day we went down

We looked around. It was actually a market with all kinds of companion pets, but mostly – dogs, cats, hamsters, and birds.

‘Oh but I want this one’ said Ian holding a little white, grey, beige furry lump of puppy.

‘What, now? Today? No! We came to do research, to see what it was like and go home and think about it and what’s next,’ I said reasonably.

‘Here, hold him’  Ian said handing me the dog.

Hello, nice to meet you, my name is Oscar … woof

On the bus home cuddling the little dog, we considered names and the puppy, some how, let us know his name is Oscar. His namesake is ‘Oscar the grouch’ from Sesame

I hope you have a rotten day!

Street. Our dog’s hair was matted, dirty and dusty, as would be if you were furry and lived inside a dust bin.

At home, he had a bath first thing. He was so cute, and look, how tiny he was. The size of Ian’s shoe. And he grew. True to his Mexican heritage, he loved (and still does) football.

so clean and fluffy after the bath! 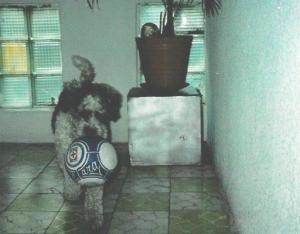 All balls in fact, and ball-playing as an act of resistance. See Oscar play ball and go to parties with his balls not bombs anti-nuclear friends.

He was and is a very friendly dog. A wee bit hyper and a bit-barky, but it’s all in the spirit of ‘big love’. He had friends in the our apartment building. This is Carlo (wearing the FBI coat) who lived on the first floor. Oscar wasn’t exactly helpful around the house, but he tried.

Carlo was originally from Tijuana

woof woof I’ve got the mop

Oscar was over all a good, friendly, quick to learn puppy-things, like pawing at a little brass bell by the front door to be let out to pee, play or just bark to annoy us. For about the first year of his life, his vocabulary was limited

to ‘sit’ and ‘ball come’. We really tried with ‘come’ but he didn’t learn it (or respond to it) until about 2 years old.  In the park, ready to go home, and the dog seemingly clueless about that, we’d desist with ”come’ and shout ‘sit’. He would, then we’d walk over and pick him up and carry him to where we wanted him to ‘come’ to.

Here he is with another friend from the building, and also his namesake, Oscar-the-boy from the third floor. 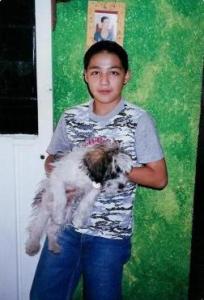 they played together every day after school

Oscar-the-boy also ran off with the dog one day in March 2005, but as you may know, we got Oscar-the-dog back. More on this story here.

So that’s it really. For now.

In his 11 years of life, Oscar has had all sorts of everyday adventures and I’ll be sharing those

taxi drivers are my best friends too! woof!!

here soon. Stories like his kidnapping, riding across countries and continents in cars, trains, ferries and bicycle trailers, his anti-militarism canine activism, diplomatic adventures crossing borders when the humans screw up the paperwork, and stealing steaks from barbeques at camp grounds and more.

You may distribute, remix, tweak, and build upon my work, as long as you credit me for the original creation and do not use for commercial purposes. You must use the same Creative Commons licence on any derivative works.

pages from another world:  oscar-introduction 11/02/15