Earlier this month student organisers in London called for protesters to cover their faces to protect their privacy. On behalf of London Mexico Solidarity Group, I wrote this guest blog for the Network for Police Monitoring explaining why the Zapatistas in Chiapas, Mexico wear masks.

why the Zapatistas wear masks

On January 1st 1994, at half-past midnight, on the inaugural cusp of the North American Free Trade Agreement (NAFTA) between Canada, the US and Mexico, 3,000 masked Zapatista soldiers emerged from the jungle and mountain villages of the southeastern state of Chiapas and occupied seven towns, including the historic colonial city of San Cristobal de las Casas.

Behind the black balaclavas or red kerchiefs (paliacates), were faces with distinctive Mayan features typical of the people native to these lands who have been resisting repression, exploitation, racism and genocide for centuries.

Zapatista March of Silence 21 December 2012 — your world is crumbling and ours is rising, click on image for 3-minute video of the march

The Zapatista Army of National Liberation and their support communities are a creative, ironic, playful yet serious and powerful social movement that many mainstream pundits struggle to understand.

They wear masks in order to be seen. For centuries indigenous people had been ‘the ones without faces, the ones without voices’ but that day, from the balcony of the Municipal Palace in San Cristóbal, a masked figure read a declaration that began: ‘We are the products of five hundred years of struggle …. [and] today we say “¡Ya basta!” Enough is enough!’

After the up-rising was quashed by the Mexican government, the Zapatistas explained to civil society ‘We went to war not to kill or to be killed but in order to be heard.’

The Zapatistas wear masks as a rejection of traditional representative politics and individual identity in favour of direct democracy, equality and to undermine hierarchy and authoritarianism.

every day organising for change

Named for the slain Mexican Revolutionary General Emiliano Zapata, and unlike Latin American revolutionaries before them, the Zapatistas reject sovereignty as a strategy for ‘national liberation’. What we know as liberal, representative democracy married to an economy based on neo-liberal global capitalism, the Zapatistas call ‘Democracy, Incorporated.’ and wholly reject it. They call for a liberation which dissolves power down to the level of autonomous communities.

The Zapatistas wear masks for protection and egalitarian anonymity, yet

they don’t wear masks all the time. When being photographed or interacting with outside visitors they wear masks to conceal their identity and to invite everyone into the Zapatista struggle.

Every day and long before their public appearance in 1994 the Zapatistas have been organising to revive indigenous customs and habits that reinforce a power different from one that dominates or prevails through use of threats or violence.

Their experiments and efforts aim to build a collective force (both in Chiapas, Mexico and abroad) that invites everyone to step into their own power and work for the greater good of the community, while  building local autonomy based on their Earth-centred traditions and leadership based on ‘mandar obedeciendo’ (leading by obeying the will of the community). 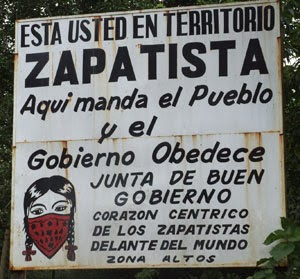 Sign: ” You are in Zapatista Territory. Here the people lead and the good government obeys. Central Zapastista Heart of the Highlands zone”

theLondon and Mexico activist communities. Together building relationships of mutual respect and support with groups resisting neo-liberalism and building another world for all. Also member of the UK Zapatista Support Network and Euro-Zapatista Network.

20 years of Zapatismo — a Circled A radio show broadcast