“So how was Mexico?” Inevitably, and quite rightly, someone asks me that question now at least once a day. Buying the ticket for the trip was my big news in February, and March was the trip. I’ve been home nearly two weeks. It is a timely and appropriate question. 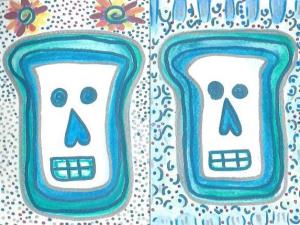 I flounder though when I answer. I don’t know what to say really. I am still making sense of the trip and what it means to re-connect with people and place that had a profound impact on the direction of my life.

On a more surface level, I can say – fine. Things are much the same as they always have been. A place where music booms every hour of every day from cars, homes, shops, buskers in plazas and on transport, and mariachis roam cantina to cantina. The people, as always, open, funny, courteous and generally helpful and respectful. The weather was sunny and mild, the cities and towns colorful and orderly in their chaos. Also as before, the population continues to grow and Mexico City in particular feels ever-more crowded and busy. Earthquake damage (from September 2017) is still visible and every neighborhood has buildings crumbling or that by outwards appearances look fine but condemned to closure because of structural damage. The earthquake has made housing ever more expensive and competitive.

In sum, the struggles of the everyday people in Mexico are the same as before, and yet more intense and precarious. Also  as before the Mexican people and all those who live there — infected by the joyous, ironic, sometimes mad joie de vivre which is so typically Mexican — are getting by some how.

The security situation is alarming and ever-worsening. As the drug war grows, so does general delinquency and wrong-doing. Impunity partly fuels this downward spiral, and unemployment and economic need are other essential ingridents. Prices, as before, seem high, particularly considering the national daily minimum wage is 90 Mexican pesos (about 5 USD or 8 Euros).

In the face of all of this, I am happy to say my friends are absolutely OK, and I would even say many are excelling in their fields, and all are engaged in worthwhile work and seem happy. Part of that, I believe is the Mexican character, so ready and able to use humor and love to confront almost every situation. Another part, I think, is the “normalizing” a horrific situation in order to cope and make sense of each day. I worry about my friends, but I also cannot see them doing anything different. They know their mission in life and they know where they belong. That is admirable.

One question I turned over and over was “What if we too had stayed in Mexico … ?” But we didn’t. 12 years ago we chose to leave, following work opportunities in London and with an eye wary of the insecurity and violence enveloping the country even then.

Much as I expected, my trip came off without incident or anything “bad” interesting or irregular happening. Using “big city smarts” and doing research ahead of time about a region and then taking general care to avoid “hot spots” or travel at night is, as it was before, a good travel tip.

I spent three days in Mexico City (or as it has been re-branded Cuidad de México – CD MX) and saw friends and tried to adjust to the altitude, busy landscape and time change. Two days after my arrival I caught a 7am bus to San Cristobal de las Casas (SCLC), Chiapas. A 14-hour bus trip crossing the Valley of Mexico, through the mountains of Puebla with the snow covered volcanos de Itzaccihuatl and Popocatépetl in the background. The bus then dropped down past Mexico’s highest mountain, Orizaba (5,636 meters or 18,491 feet and also known as by its Nahuatl name Citlaltepec) to the lush, hot, tropical climate of Veracruz and its straight and well maintained but narrow roads. By 10 o’clock at night, and exactly on time, the bus had wound its way past the ranches in the fertile valleys and low lands of Chiapas up to the mountains, to SCLC.

The scenery the whole way was absolutely stunning and diverse. I’ve made the journey several times before, but always at night. I was advised day-time bus travel is safer, which seems reasonable and I took the trip as a gift from the universe, as an opportunity to see all that natural glory.

A few days later I found myself with about 7,000 other women in Caracol Morelia, Zapatista territory. I was there to take part in the “First International Political, Artistic, Sports, and Cultural Encounter for Women who Struggle” planned, organized and hosted by Zapatista women from the autonomous communities.

This event invited all women and children who are resisting misogynistic culture to come together to meet and learn from each other, create networks — if that’s what arose, and simply be in a women-only space, and consider our health and well-being as women struggling for greater equality. Jenny, one of the organizers said, “What we wanted was to meet many women. We thought maybe only a few women would come, so we are very happy to see how many of you have joined us here, but we are very pleased to see that there are so many other women who are fighting patriarchy.” At least 2,000 Zapatista women were in attendance as community representatives, specifically charged with taking their learning home, along with scores more women from communities in Mexico and around the globe.

The Zapatista women prepared and managed the site ensuring all women had a place to sleep, food and non-alcoholic drink were available, sanitation services (toilets, water points and showers) were functioning, as well as the other really important stuff like operating the sound and lights system to the main stage and scads of workshop areas. They coordinated and participated in a rich, wide-ranging program of events. Everything from movie-screenings and theater, song and dance performances, art exhibits and mural-painting, sport matches – basketball, volleyball and soccer – and workshops in self-defense, sexual and reproductive rights, ending violence against women, nature protection and decolonization, LGBTQ discrimination, and much more!

The event ran over 6 days, the first and the last days designated for arriving and leaving. The first conference day was held by Zapatista women who gave a welcome and overview of the 30 some years of their struggle; and the following days’ program primarily led by collectives and women from civil society, with some Zapatista contributions.

At the end there are links to tell you more about what we did and what happened at the women’s conference. 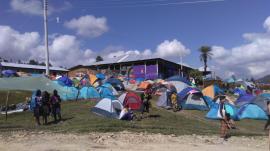 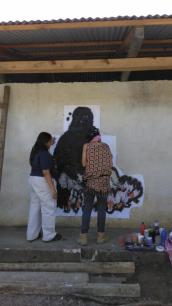 As I have been saying – I have a lot of new and old feelings and learnings to turn over and integrate, that I don’t know yet what I learned. Except I have one observation about organization and solidarity and the Zapatistas that is very clear.

Civil Society – national and international – have been key to the Zapatistas’ survival, and our solidarity remains essential. Grassroots vigilance and our strategic outcry with urgent actions likes letters, meetings or mobilizations are important to safe-guarding the lives and safe-keeping the spirits of our Zapatista brothers and sisters. Every day Zapatista communities face very real hostility and aggression, our accompaniment — there and from a distance —  is important.

At the same time, I’m left in awe seeing in action how super organized the Zapatistas are. That is primarily what I take away from the experience, and I am left with the question:   what about me? What about us? What does my / our alternative world look like and how collective and strong a body is it? How to grow that sort of organized, disciplined nonviolent resistance in my back yard so to speak?

If you’re disappointed to have missed this year’s meeting, mark your calendar. The Zapatista women have said there will be another one soon. Until then here’s some of the coverage of the event.

News about the First International Political, Artistic, Sports, and Cultural Encounter for Women who Struggle