After we landed, the first thing I remember hearing and wondering whether it was ordinary or out of the ordinary was – “We invite all the Moroccans to disembark first and those with other passports to wait.”

I was aboard Binter Canarias flight number 6101 from Gran Canary to El Aauin, Saharawi Arab Democratic Republic (SADR), territory illegally occupied since 1975 by Morocco. Some women from National Union of Saharawi Women (NUSW) and compañeras from a Basque network which supports the NUSW had invited me and a colleague to come and do a course in nonviolent resistance and feminism.

Us “other passport holders” turned out to be eight: two women, two men and the four of us, me, my co-facilitator and two representatives from the Basque network. Meanwhile the Moroccans disembarked, there had already been questions whether “Rosa …” was on board? Yes she was. “Are you travelling alone or with others.” We had decided beforehand that we would do our best not to be separated, concerned that otherwise we opened ourselves to the Moroccans “fishing” for information. “Travelling with three others” we answered. “Everyone’s passports, please, and sit tight on the plane and wait” was their reply. 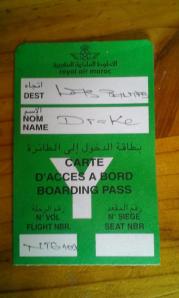 No reason given for our forced return, we were simply handed a boarding card for the return flight

The wait was 45 minutes, and the outcome was a return ticket to Gran Canary, our bags re-loaded onto the back cargo area of the 54-seat plane and our passports back in hand. They refused to tell us why we were being denied entry either verbally or through written documentation. That was simply the end of our trip.

Given this response, I can only assume that the unlawful occupiers of Western Sahara oppose the rights of women and international friendship and solidarity.

The Basque women have worked in the region for years and this invitation was based on a visit the women had made earlier this year when they had done a “listening tour.” They had asked, “what could be done to support the Saharawi women’s efforts to continue learning about feminism and develop their country?”

my only view of Western Sahara, one from the window of an airplane

“Training in nonviolent resistance and boots” the women answered.

For 39 years Western Saharawis have lived under Moroccan occupation and struggled for the right to self-determination. Officially one of 17 territories on the United Nations list of Non-Self-Governing Territories since 1964, SADR  is the most populous territory on that list, and by far the largest in area. In 1975, after the death of the military dictator, Franco, Spain left Western Sahara and the Moroccans moved in shortly after. Ever since Western Sahara has been fighting for independence and the international community to do the right thing – recognise their right to autonomy and pressure Morocco to leave the territory.

the first up-rising of the “Arab Spring”

The civilian population in the occupied territory has largely acted using nonviolent action. The SADR has a government in exile and an armed wing:  the Polisario Front. One of the most recent shoves towards democracy took place in October 2010. Most news-watchers will remember the “Arab Spring” as  bursting forth in December 2010 in Sidi Bouzid, Tunisia when the market vendor Mohamed Bouazizi set himself on fire in protest of courruption. 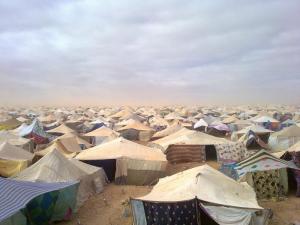 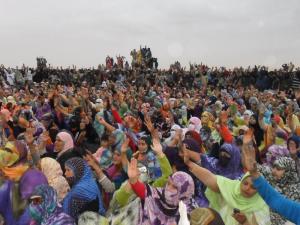 A few weeks before this in October, thousands of Western Saharawi women, men and children had established Gdeim Izik peace camp, a few kilometres east of El Aaiun, the capital of occupied Western Sahara. It was an act of mass protest against the their continuing marginalisation and the indifference on the part of the international community to their plight. The Moroccans’ response was ruthless. On 8 November security forces moved in and within a day the camp was gone, its tents torched and residents forcibly removed. Human rights activists were jailed, others disappeared and public space shrunk even further.

this is what we do, how can we help?

In December 2013, the Basque women had visited to share about their work in Europe – particularly their programme of “empowerment schools” and to ask how international solidarity might be most effective and useful. Hearing about the Basque women’s centres and activities, the Saharawi women became clear that they too would like a women’s space. And some how by February 2014 they had found a way to establish their own women’s house for meetings, courses and cultural events. In the February follow-up visit they asked the Basque compañeras for nonviolence training and boots.

The request for nonviolence training seems obvious enough. The 2011 book “Why civil resistance works: the strategic logic of nonviolent conflict” by political scientists Erica Chenoweth and Maria J Stephan reports that between 1900 and 2006 of all the cases they studied nonviolence resistance campaigns were nearly twice as likely to achieve all or partial success as their violent counterparts.

It’s hard to run in flip-flops, we need boots

And the boots? “It’s really hard to run from the security forces wearing flip-flops” the women replied. “Some good sturdy boots would help us to hold our nonviolent protests and then be able to run away before we are nabbed by the police.”

I don’t know how we’ll get boots onto the women’s feet, but we are already thinking about plan B – how to bring nonviolent resistance and feminist solidarity to the Saharawi Arab Democratic Republic. Watch this space, and meanwhile here’s our press release about the incident.

I only heard of the Saharawi Arab Democratic Republic’s when I moved to Great Britain in 2006. For 36 years of my life, I wasn’t aware of this nation’s struggle for self-determination. And then it was only through a solidarity vigil organised by Women in Black London that I heard mention of the situation. But in the last few months I’ve learned a lot and here are a few things that I have found interesting, powerful or useful.

Hijos de las nubes: al última colonia — a documentary about the historic and contemporary situation of Western Sahara. The title in English is Sons of the clouds:  the last colony

History of the conflict — short animated piece from the film “Sons of the clouds: the last colony” (subtitled in English)

Western Saharan artist Aziza Brahim sings the poetry taught to her by her grandmother. This song is called the Feeling of Being Inside a Tank

Gdeim Izik: the first, forgotten spark of the Arab uprisings — short article about the peace camp

And the book I mentioned at the beginning, mostly travel log with fantastic photographs:  El karam:  crónica de un país

2 thoughts on “nv and boots”